... from the beginning to the present day

Not Deaville Road, but a glimpse of how Stoke on Trent must
have looked in those days.

Jack first set up shop as a greengrocers, then expanded into the coal merchant’s business, to make full use of the yard, field and stables behind the shop - an area now occupied by housing development.

While his wife looked after the shop, Jack collected the coal direct from the pit and it was then delivered to local homes, with two horses and carts.

In the early 1950’s, the horses were retired and replaced with more efficient (but less romantic!) lorry power. Around that time, Jack’s young son Geoff, who is now Managing Director, used to accompany him on trips to the mine. He enjoyed the outings so much that, on one occasion when he thought father had left him behind, he walked to the mine, only to discover that his father had, all the while, been in the fields behind the shop!

As they grew up all four of Jack’s sons, joined the family fuel business, although Gordon, Michael and John left the company to build the hauliers that had developed as part of the business.

Mechanised handling of fuels increases efficiency, with sacks filled in a series of semi-automatic hoppers.

In August of 1992, the company moved to its present location at the industrial estate in Milton, allowing expansion and modernisation to keep up with current business requirements.

Employing a team of around 30 staff, Harrisons have taken on new products and have harnessed computer technology to meet the needs of the 21st century, supplying homes, factories, hotels, farms and all kinds of premises with modern, efficient fuels. As well as direct deliveries, many products are supplied to garage forecourts and shops, for sale as convenient, pre-packed fuels 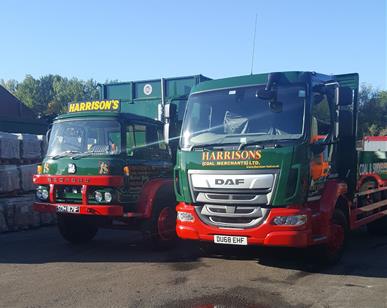